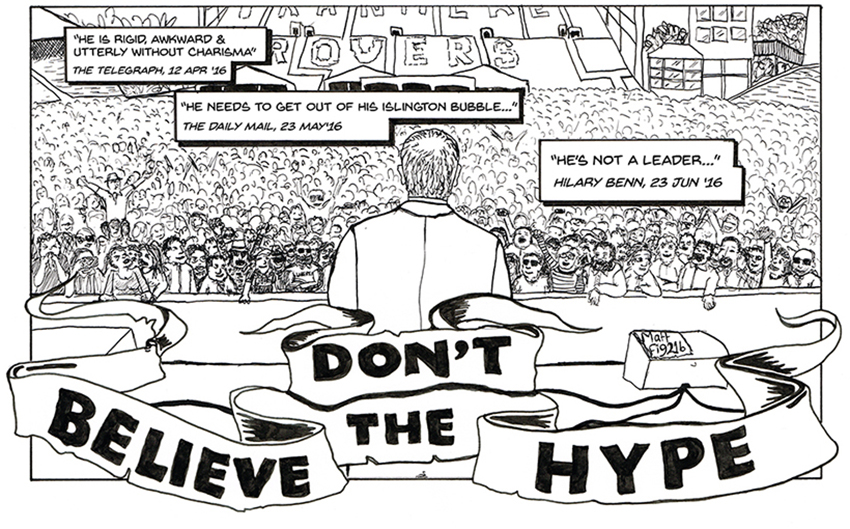 I’m trying to draw more these days. I used to draw way more regularly – I’d keep a comic diary and I really enjoyed doing it. But life gets in the way and I gradually stopped doing it (box sets don’t binge themselves right?). The question I’ve asked myself is how do I force myself to get on with just doing some drawing? Well I’ve started doing a few things that are helping. Firstly, the one thing that I know always gives me a kick up the arse is a deadline, so I’ve been on the lookout for things that require me to write, draw and submit something by a certain date.

It’s working too. I’ve recently submitted a one-page comic strip to (they didn’t want it – sob sob) be part of a book being published by Self Made Hero about Jeremy Corbyn (the details are here). It was a deadline and I stuck to it. I wrote, pencilled, inked, lettered and re-lettered digitally a full page.

So here it is, a page about the disconnect between the information we are fed on a daily basis and what we see with our own eyes:

Despite the deadline I didn’t get done exactly what I wanted to do though. I really felt like trying to colour this strip with watercolours, but as I’ve never done this before it turned out to be too ambitious this time. I will try and practise that skill though and maybe come back to do it at a later date. I’m fairly sure it’ll look good as I’ve had a little play with using some block colour digitally just to see what kind of effect it has. I think this approach, but in real watercolour will really bring it to life:

I pretty happy with the outcome, I guess the inking could be a bit tighter, but lets to post-rationalise that and say it’s supposed to be loose to subconsciously draw your mind to Corbyn’s perceived scruffiness in real life. Yeah, that’ll do